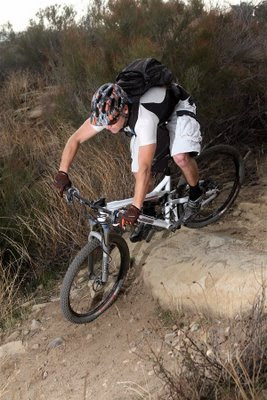 On cross-coutry test rides we were impressed with how the white Tracer VP screamed uphill. The suspension setup had almost no unwanted suspension movement and maintained ideal traction when in the saddle. Aboard this Tracer with a 69-degree head angle and 13.5-inch bottom bracket, we found ourselves cresting some of our toughest climbs hammering in the middle chainring and getting to the top quicker than usual.

With 5.5 inches of front and rear suspension, the Tracer VP can gobble up technical cross-country trails with the best of them. After setting the sag, the Tracer's rear end sucked up hits at speed and when slicing through rutted corners. 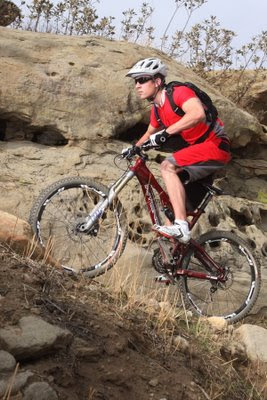 Even though the changes to the red Tracer may seem minute when compared to the white bike's build, the improved descending capabilities were remarkable. The shorter 80mm stem and longer 6.3-inch-travel fork position an agressive rider over the front of the bike in an attack position. And the 20mm air-sprung through-axle Fox fork is an impressive slider, allowing the rider to point-and-shoot his way down the trail.

We descended our favourite cross-country trail faster on this new Tracer than we had on any bike previously tested. Let's say that again. We could ride this bike faster down our well-known trails than any other bike. The suspension performance combined with the component package produced one impressive machine that allowed us to relax, stay in control and let it roll.

Riders who consider themselves more traditional cross-country types will appreciate how the white-build Tracer scampers up hill, and the 5.5 inches of travel smooth whatever lies ahead on the trail. If getting to the top eventually, and not shying away from a single obstacle on the descents is more important to you, then the red-build TRacer is for you. With either Tracer VP, you'll be leaving your friends in the dust in at least one direction.